Smyrna Rotary Club is typically involved in one or more global projects. These are some of the most recent ones.

We are still working on our South Africa SOUNS project with Brenda Erickson. The total grant was for $60,125. $7,000 was contributed in 2015-2016, which was for more SOUNS sets that Brenda delivered to South Africa. Smyrna Rotary Club is the lead club.

Smyrna Rotary is the international partner with other Rotary Clubs in South Africa for a Rotary Global Grant. The Grant was proposed in 2013 and kits were delivered in the summer of 2014. This grant is ongoing with all the proposed kits being delivered to date. SOUNS was developed by Rotarian Brenda Erickson of the Peachtree City Club and she and her husband travel to provide training on use of the kits. Other participating organizations are the Peace Corps, University of Pretoria and South African Congress for Early Childhood Development.

The grant provided for 250 sets to be delivered for training and use in classrooms. SOUNS is effective in all languages since it teaches the sound of the letter and is tactile for letter recognition. Each student can sound out the letter and use that knowledge to form words in their native language. This is an innovative method since it teaches the child how to develop words vs. memorization of sight words. We have also participated in a SOUNS project in Puerto Rico with similar results. This project was recognized by the United Nations for its ingenuity and effectiveness.

SOUNS has also been used in South Georgia through a partnership with HeadStart. SOUNS projects are sustainable in that the kits are reusable and once trained, the teachers can continue to train future children and also train others on how to use the kits.

The horrendous scourge of Polio used to be everywhere, even in the United States. America’s most famous victim was President Franklin Delano Roosevelt. And its most famous treatment center Warm Springs, Georgia. But millions of people worldwide have fought back methodically, eliminating it from one country after another. Yet polio still exists in three countries: Pakistan, Afghanistan and Nigeria. India is finally off the list. While India’s last case of polio was in 2014, vaccinations are still given there to 167 million children under age 5 every year to prevent another outbreak. 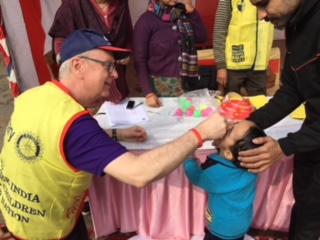 Since taking the mission of eradicating polio in 1985, Rotary International has worked in over 125 countries. Defeating polio Rotary’s biggest project worldwide, though it has thousands of others locally, nationally and globally.

Twenty-year veteran Smyrna Rotarian Reverend Raymond Coffman, chaplain for Wellstar Hospital in Austell, was invited to India to participate in the Polio National Immunization Day 2017. Though he’s travelled to over 20 countries, Coffman said this recent trip was like no other. 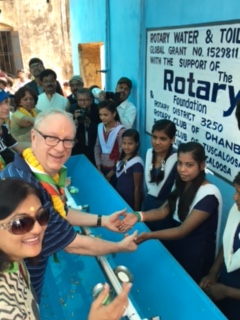 Arriving in Delhi with a team of 20 Rotary Members from all over the East Coast on January 20, 2017, Coffman got a crash course on India’s unique culture. “Everything was extreme,” Coffman said. “Extreme poverty, extreme traffic, extreme trash, extreme kindness, extreme thankfulness, extreme colors. Traffic is crazy and the smog and air pollution are awful. You share the road with cars, scooters, buses, three-wheeled taxis, men pushing carts selling just about everything, cows, goats and dogs too.” 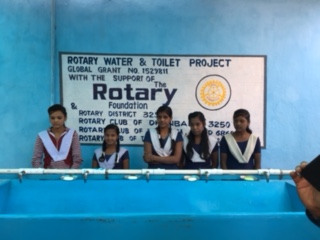 Setting up a vaccination booth in the city of Ghaziabad, in the state of Uttar Pradesh, Coffman spent his first day immunizing children and the second day going door to door, checking to see if anyone was unable to get to a booth in the nearby village of Sahibabad. The smiles and the gratefulness locals exhibited were incredible. Coffman said. “We were told not to admire something in someone’s home because they would just give it to you. They are very generous.” 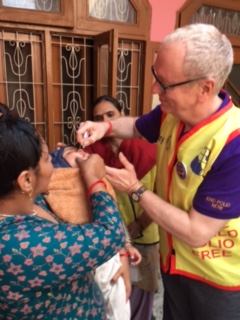 With the vaccination project taking only a couple of days, Coffman spent much time visiting Rotary projects in Delhi, Dhanbad (600 miles southeast of Delhi) and Kolkata (125 miles southeast of Dhanbad). These included sanitation improvements in communities using open sewer systems. “There are cement trenches on the side of alleys and everything comes out of the house,” Coffman said. “We cut the ribbon on toilet blocks and hand-washing stations. This means a girl having her menstrual cycle doesn’t have to miss or often drop out of school. They have a private place now to go to the bathroom. It’s really a miracle that we eradicated polio in India when you see such conditions.” 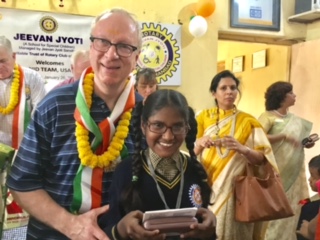 “In Dhanbad, India’s coal capital, we visited a public school for Special Needs Children that was sponsored by the local Rotary Club. Children with learning disabilities, low-vision and hearing challenged are provided a loving and productive center to learn and thrive that would not be possible without the funds donated by the local Rotarians. Eight students received eyeglasses that day for the very first time in their lives.”

Says Coffman, “my professional and personal life has been enriched by witnessing the work of Rotary firsthand and seeing lives changed by the compassion of caring people.”